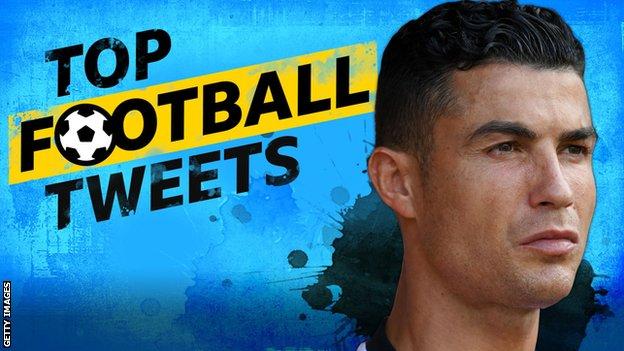 Ronaldo tore into his club and manager this weekend.

Fans and pundits on Twitter are reeling after Cristiano Ronaldo ripped into Manchester United and manager Erik ten Hag in an explosive interview with Piers Morgan.

The 37-year-old Portuguese star, who did not play in United's win over Fulham on Sunday, said Ten Hag and others at the club are trying to force him out, adding he feels 'betrayed'.

Will he ever play for the club again?

Meanwhile, Brentford striker Ivan Toney responded strongly to being left out of the England squad by Gareth Southgate, while Chelsea defender Reece James, who is also not on the plane to Qatar, chimed in too.

And there was an attempt by Alex Iwobi to appease angry Everton fans that really didn't go down well.

All of that, and more, is in this week's round-up of the best tweets from the weekend's football.

1. The most explosive 90 minutes of Ronaldo's season

Ronaldo has taken a direct approach as the Premier League breaks for the World Cup.

It's been a tumultuous season for one of the world's best players and the fallout with Ten Hag has already been pretty public. After agitating for a transfer in the summer, he refused to come on as a substitute against Tottenham last month, which led to manager Ten Hag dropping him against Chelsea.

Since then, Ronaldo captained United in a 3-1 defeat against Aston Villa on 6 November, but has since not played for the club because of an unspecified illness.

Lots of pundits have condemned the way that Ronaldo has conducted himself.

Some fans, of course, are still in his corner.

Meanwhile, with limited involvement on the pitch this season, some are pointing out that this interview is the first full 90 minutes the forward has contributed for some time. 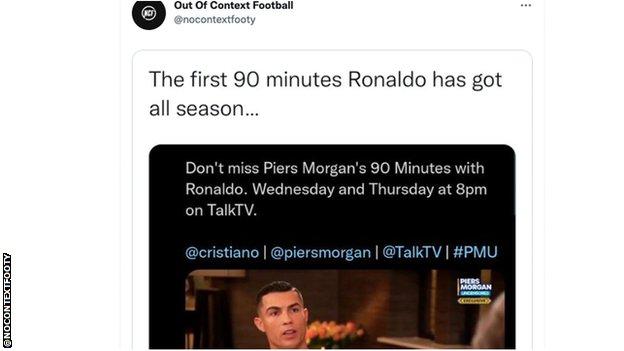 He's been done there. 2. Motivation

Chelsea full-back Reece James, who has been out with a knee injury since mid-October, offered this quite thinly-veiled response after also being left out of Southgate's plans.

Should Toney be on the plane to Qatar?

Meanwhile, Ben Mee has had worse days at Etihad Stadium. Lots of them. The 33-year-old defender joined Brentford from Burnley in the summer. During his time with the Clarets, he saw his side lose 5-0 on four separate trips to Manchester City.

After Manchester City lost, it was confirmed that Arsenal will be top of the Premier League table on Christmas day. They sit five points clear, going into the break for the World Cup. The Gunners will be hoping that the ghost of Christmas past doesn't come back to haunt them.

Either way, it's a proper title race.

Leicester midfielder James Maddison gave England fans a bit of a scare when he limped off after 25 minutes against West Ham on Saturday. The 25-year-old, who was included in the 26-man World Cup squad, has scored seven goals in 13 Premier League appearances this season - including one on Saturday.

He has put fans out of their misery, playing down the injury.

6. Play for the shirt

Everton are not in very good shape. The Toffees faced Bournemouth twice last week and were well beaten on both occasions.

After being thrashed 4-1 in the Carabao Cup on Tuesday, Everton lost lost 3-0 at the Vitality Stadium on Saturday. They have now lost five of their past seven Premier League games and sit 17th in the table.

After the full-time whistle, some players went over to talk with angry fans in the away end.

There has been a lot of opinion - good and bad - on the 23-year-old striker since he moved to Anfield for around £85m in the summer. He leaves for Qatar with a tally of five goals and two assists in 10 appearances.